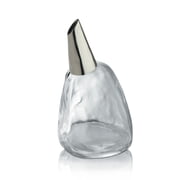 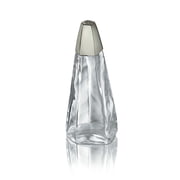 Alessi already announced the cooperation with the star architect Peter Zumthor in 2013. After two years of work, the cooperation resulted in six different models, made out of cast crystak glass. The Zumthor Collection with different dosing containers for sugar, salt, pepper, vinegar and oil looks like crystals or stalactites. The silver-plated details contrast the glass corpis and complement the design on an exceptional way.

An impressing collection emerged out of a simple idea thanks to Alessi. Peter Zumthor explains how it started:

„Then one day, it came back to me: it was the sketch I’d done that morning at the hotel. I took it straight to my workshop and I asked to make a series of prototypes based on the sketch, using glycerin soap; they had to look like brothers and sisters, young and old, but all members of the same family. They created a beautiful set of soap objects that looked like they were made from frosted glass. “ Peter Zumthor