Casala was founded in the year 1917 in Lauenau in Lower Saxony. Casala became known in the 1970s through the Casalino chairs designed by Alexander Begge, which sadly were forgotten in the 80s but were brought back in 2007. 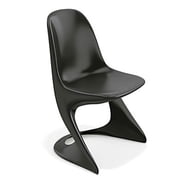 Casala was founded in the year 1917 in Lauenau in Lower Saxony. There the company, which is now owned by Casala Meubelen in the Dutch Culemborg, still maintains its office and showroom.

Casala – named after the founder and home town (Carl Sasse, Lauenau) initially produced wooden shoe soles starting in 1917. After the First World War, the company expanded its range first to wood furniture, then on to metal and upholstered pieces. In the 1950s, the company was known primarily through school furniture.

Despite the change of owner, the new Casala remains the same as the old. The owner has been closely connected to the company for more than thirty years. The suppliers, mainly from Germany, are still the same and the technical and ergonomic know-how of the traditional Casala are unchanged.

Today, Casala produces very durable modern objects. In the foreground are quick handling, flexible use and technical innovations. That the chairs not only look good but are also comfortable is ensured by ninety years of experience in furniture construction. Casala furniture is available in more than 20 countries around the world.