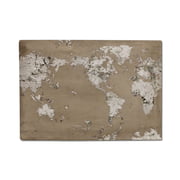 Considering Bertrand Jayr simply a designer would surely be short-sighted. Moreover, the Frenchman is an artist who is also able to work with products and its production.

Bertrand Jayr graduated from an School of Arts and Crafts in Lyon in 2004, where he still lives and works until today. Already back then it turned out that he likes working with concrete best.

The products of Bertrand Jayr stage-manage themselves in a particular way by giving everyday objects a new materiality as well as an industrial impression. They appear to formally speak, telling their own story. Last but not least, this is possibly due to the fact that some of Bertrand Jayr's strongest influences stem from conceptual art.

The sculptural concrete designs by Jayr inherent a great deal of humour and rebellion. They are graphically very prevalent without ever losing sight of its real use. The combination of shape and function also often offers aspects that are socially critical or stimulate reflection through their moral value: an industrial-tube-shaped vase which combines the contrasts of nature (flowers) and concrete (concrete tube). Thereby, the designs of Jayr never get too dogged or serious, but always maintain its wink-of-the-eye easiness.