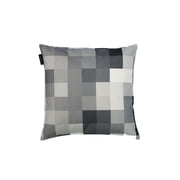 The Spanish designer Cristian Zuzunaga is famous for integrating pixels and rectangular figures in his colourful designs. Zuzunaga learned Typo / Graphic Design at the London School of Communication and the Royal College of Art. The designer finds inspiration for his works in the construction and the architecture of big cities.

Since Cristian Zuzunaga learned how to print books as a student, he especially worked with graph patterns and geometric forms such as pixels. Zuzunaga says that pixels are “the icon of our time”. Pixels play a huge role in the contemporaneous life and have influenced whole generations as part of video games, television and digital photography.

Cristian Zuzunaga’s innovative works especially protrude because of the usage of numerous and strong forms that he uses to emphasize emotions and overcome stuck attitudes of determined colours, beside the graphic forms, that also characterize this designer.

Cristian Zuzunaga began to work with textiles after he travelled to Shanghai in the year 2006. Since then he worked together with namely companies such as Kvadrat, Ligne Roset, Christophe Delcourt, Tate Gallery, Nanimarquina and Hästens. Among others he designed the cushion named “Squaring the Circle”.