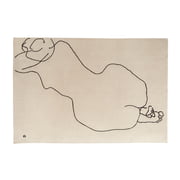 Eduardo Chillida is one of the most important Spanish sculptors of the 20th century. Born in San Sabastián in 1924, he moved for the study of architecture to Madrid, only to shortly after concentrate entirely on arts. Moving to Paris, he established his studio in 1948 and began working on small sculptures made of plaster and clay.

His most famous works today include the expansive sculptures and sculptural installations such as the Buscando la Luz at the Pinakothek der Moderne in Munich or the Peine del Viento in his hometown San Sebastián.