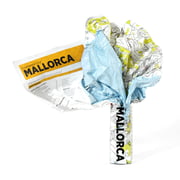 Emanuele Pizzolorusso is an Italian designer who works as a concept and industrial designer. His creations – like the Crumpled City Map – are playful, unexpected and very functional.

The designs of the Italian are made to question the relationship between a product and its usage for the user. The designs by Pizzolorusso are considered to be innovative re-interpretations of classic (home) objects leaned on the modern, nomadic lifestyle and the influence of digital media.

After Pizzolorusso has been working for international customers and as concept and industrial designer, he eventually founded his own studio in the Finnish Helsinki in 2010.