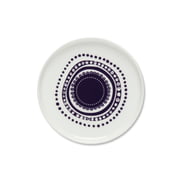 The Svaale series by Sanna Annukka for Marimekko is a series consisting of textiles and kitchen utensils. The Svaale pattern in muted autumn shades such as blue, green or brown convinces with an abstract pattern. The main motif is the arctic fox (fin. Svaale), who plays an important role in Nordic mythology and fascinates the Finns.

Sanna Annukka decided to use the Svaale pattern to depict the mystical character of the arctic fox in simple shapes. She was inspired by old Eastern European embroideries, in which animals were often depicted in a very abstract way.