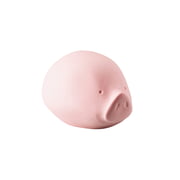 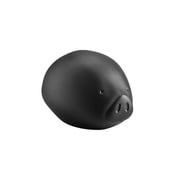 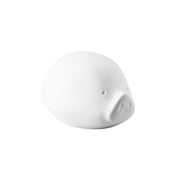 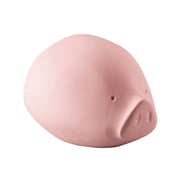 On the occasion of the 100th Birthday of Philip Rosenthal (1916-2001), the designer Sebastian Herkner designed a collection that moves the pig - a symbol of good luck, prosperity and power - in the focus. Roro, once the pig in the factory of Rosenthal at Rothbühl, who used to be a small celebrity there, became the godfather for the design. Due to a lost bet with Philip Rosenthal, the architect Walter Gropius had to supply a stable design for Roro. So, he sat down to work and drew a stylish enclosure with stall in the Bauhaus style with grassland to graze. Unfortunately, the design was never put to practice, but the story is entertaining all the same.

“The characteristic nose is enough to recognise a pig in the object.” Sebastian Herkner

RORO is a tribute to the special friendship between Rosenthal and Gropius, made of porcelain. Whether as a decorative object or classic piggy bank Roro by Sebastian Herkner now moves into every living room and delights young and old.

In addition to the sculptural Roro figures by Sebastian Herkner, the designer Ewelina Wisniowska has dedicated herself to the popular motif as well and immortalised the company’s mascot in the decor Palazzo Roro for the TAC tableware series.