Self-Financed and Profitable - Recognition for Connox at K5

Hanover, 16.06.2016. Among the visitors and speakers at the K5 Home & Living on 14th June 2016, interior design shop Connox was a rare species: self-financed, continually growing for the last ten years and profitable to this day. In conversation with Jochen Krisch from Exciting Commerce, the founders and directors Thilo Haas and Kristian Lenz gave insights into company development and a glimpse into the future. For the first time, a whole conference day at the E-Commerce Conference K5 Berlin was dedicated to the furniture trade of tomorrow.

Small beginnings, profits reinvested, steady growth and profitable throughout - this is how Haas and Lenz described the development of Connox. A success story from start to finish. But still: to grow so deliberately with money from your own pocket is not easy, admitted Kristian Lenz. But on the plus side, the two founders have always been their own masters - an online shop asserting itself on the online market without investors for over ten years. There were not many of those at the K5. Haas and Lenz also ascribe the success to their team, saying that they are what make Connox what it is. As well as this, they said that the company has hardly fluctuated since its beginnings - quite the opposite. Over the last couple of years the number of people employed by the interior design shop has doubled. 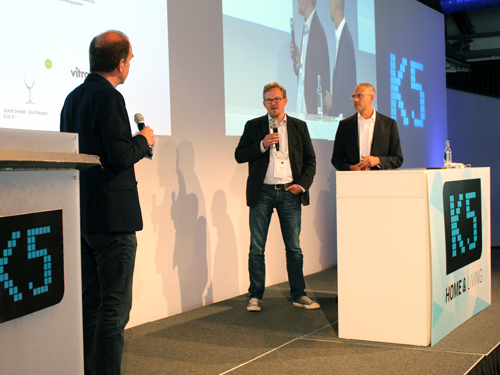 Internationalisation. professionalisation and growth have been hot topics at Connox over the last year. and they're not stopping - there are big plans for the future. Not only do they plan to launch further international shops in Europe, they are also expanding work on the app, customer experience and service, for example with their own community.

Catching Up for the Online Furniture Market

Experts like Ruppert Bodmeier from the dgroup see online trade as being stuck in the 90s: even if there are a few shopping apps and responsive websites around, the development in the German furniture trade is far away from the explosively rising use of mobile devices. The problem: many topics and tasks come up against a lack of resources. Bodmeier went on to say that profitability is going before growth, and the development of the trade is slow because of it. Dr Alexander Hirschbold, director of MedienPark, added that bricks and mortar trade has also been sleeping. According to him, these stores often don't even implement the basics of online marketing, with "the Internet" delegated to a single department.

Sold Out – Despite Specialisation

With more than 800 registrations and many more interested, the K5 Berlin was sold out. While the conference has always tackled the future of online trade in general, this year the K5 Team ran K5 Home & Living for the first time - an ecommerce conference especially for the furniture industry. As well as Connox there were presentations from online shops Home24, Westwing and moebel.de, the brand Fatboy, the startup Tylko with their innovative app for furniture configuration and many more that are currently shaping the furniture market.

About Connox
Connox is one of Europe’s leading online shops for interior design. The company, based in Germany, has websites across Europe with more than 16,000 selected premium products, including a broad range of award-winning designer products, design classics and other beautiful items for the home. For the 80-strong team, the customer comes first and is central to every working decision. Connox customers benefit from high quality service, a readily available customer care team and a modern shop dedicated to the user experience. The specially developed shop software "EC Suite" enables a high technological flexibility and guarantees the latest security standards.

Further information about the company and our products can be found in our Press Area. Or stay up to date by subscribing to our RSS feed.