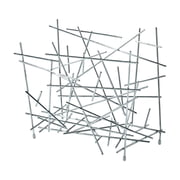 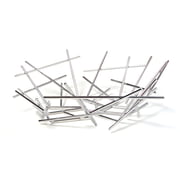 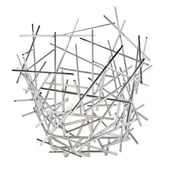 Humberto & Fernando Campana are known for their creations that unify art and design seamlessly. The furniture and objects by the Brazilian brothers doesn’t seem to be fixed on an industrial way, but by artists’ hands, organized arbitrarily and by chance. The viewer will initially be irritated, since the Campanas transmitted a feeling of instability with vivacity at the same time.

The Blow Up collection, designed by Humberto & Fernando Campana for Alessi, is a master example for the design philosophy of the brothers. The designs act as if they were organized by chance and they remind us of Mikado sticks or explosions. Sometimes the seemingly organization results in a bowl, a plate or a fruits tray. Even newspaper holders and an umbrella stand came out of the unique design philosophy of this collection.

The vivid geometric interplay of shadows is also interesting, since it is visible depending on the income of light. The material of the Blow Up objects was carefully chosen by Humberto & Fernando Campana: mirror polished 18/10 stainless steel. The anniversary of the cooperation of Alessi and the Campana brothers resulted in the presentation of the “Blow Up Bamboo”: this bowl focusses bamboo as material. A big contrast to the otherwise cold metal of the Blow Up collection is granted here.