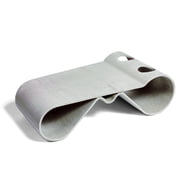 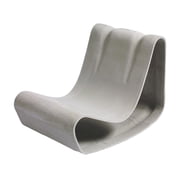 Willy Guhl was born in Stein am Rhein in Swiss in 1915. He advanced to one of the most important representatives of the Swiss neo functionalism of the 20th century as a furniture designer. Guhl taught at the School of Applied Arts between 1941 and 1980.

Guhl’s beach chair out of 1954 brought him special recognition. It is characterized by the eternit band it is made of, which gave it an archaic expression because of its material and also a loose look because of the swung lines.

After his material eternit became unaffordable because of the asbestos, a modified variant of the chair named “Loop” out of stripped eternit was produced since 1999. Willy Guhl is also responsible for the design and spent the suitable side table to his classic by the way.

Willy Guhl passed by in Hemishofen in Switzerland in 2004.