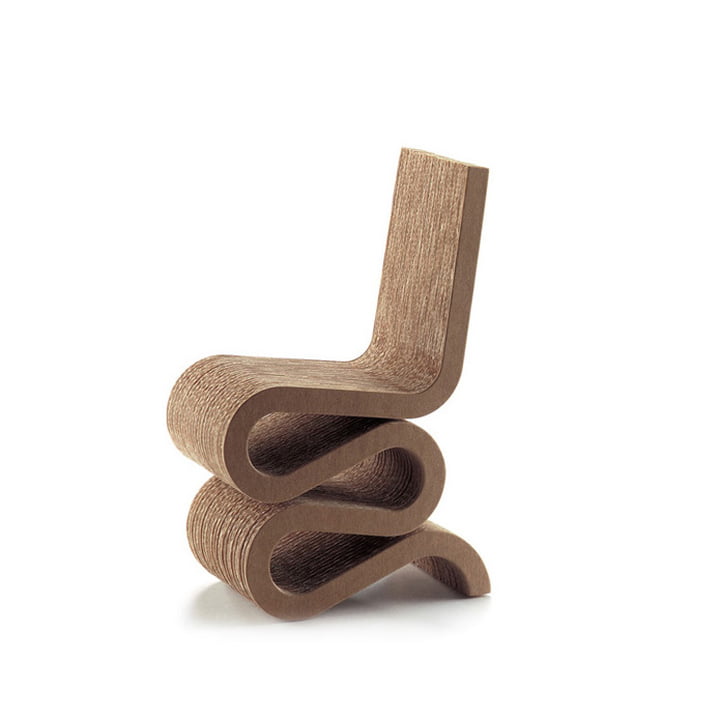 As early as the 1960s, cardboard furniture emerged as a cheap and light alternative to traditional furniture. At that time, slotting and folding as well as supports were used to ensure that the cardboard could bear sufficient weight. Nevertheless, cardboard furniture hardly had a chance against plastic furniture, which was equally light.

Frank O. Gehry discovered a process which enabled cardboard furniture to be made in massive blocks – cardboard sculptures, as it were. »One day I saw a stack of corrugated cardboard in my office; it was the material I used to build my architectural models. And I started playing around with it, gluing it together and then cutting it into shape with a handsaw and a pocket-knife«.

Gehry called the material made of corrugated cardboard glued in layers that ran at right angles to each other »Edge Board«. In 1972 he brought out a series of extraordinarily stable cardboard furniture called »Easy Edges«.

The original of the Wiggle Side Chair was designed by Frank O. Gehry in 1972 and it is produced as 1:1 model by the Vitra AG, Basel/Switzerland since 1992.

The here offered miniature by Vitra (scale 1:6) consists of polyurethane and leather.