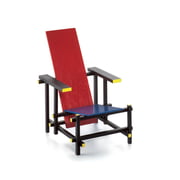 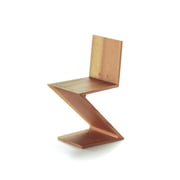 The Netherlands Gerrit Rietveld (1888 – 1964) was one of the most important designers and architects of the 20th century.

After his apprenticeship to become a painter in the gold-smithy workshop C.J.A. Begger between 1904 and 1913, he entered the Kunstliefde group in 1911/1913 and founded an own furniture workshop in Utrecht in 1917. He soon became part of the Neoplasticism inclined De Stijl movement surrounding Theo van Doesburg and Piet Mondrian. His works from 1918 on clearly mirror the artistic ideals of this group.

Objects and constructions were converted into abstract compositions of lines and surfaces by Rietveld, focusing on black, white, grey and the primary colours yellow, red and blue. However, he developed his legendary red-blue chair in 1918, initially without the distinctive, name-giving colours – these only came in 1923.

Between 1924 and 1925 Rietveld created his first architectural work, the Schröder House which is legendary today. On his search for possibilities of developing his radically aesthetic ideas, Rietveld separated from the De-Stijl-aesthetic and experimented with innovative materials, among them plywood and aluminium, until the 1930s. Out of this period emerged more surprising furniture variants, such as the legendary Zig Zag Chair (in about 1932).

After 1945, Rietveld mainly worked as architect and designed prestigious buildings such as the Netherlands pavilion on the biennial terrain in Venice. At the latest, the huge De Stijl retrospective 1952/53 in the New York MoMa ensured him international recognition as one of the pioneers of modern design.