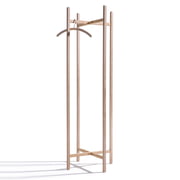 His training as an industrial designer began at the Munich Polytechnic Design School (1989-1991), followed by the Saarbrücken School of Art and Design (1991-1995, Diploma). He worked as assistant of Konstantin Grcic and as industrial designer in the London office of Jasper Morrison from 1995 to 1998.

In winter 1998/99, he set up his own office in Munich. Since then he designs for international customers such as Magis, Nils Holger, Moormann, ENO-Paris, Promoseria, Lifebridge Medicine Technique AG, Side by Side and the Palais Pinakothek in Munich.

The spectrum of his work reaches from furniture, lamps, household items and medicine devices up to the design of interior and exposition rooms.

His products were presented in numerous expositions and also awarded with numerous design prizes, such as the IF and the red dot design award in 2008.