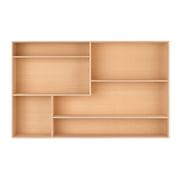 James Irvine studied at the Royal College of Design in London.

He founded his studio in Milan in 1984 and was a member of the Olivetti Design Studio until 1992. From 1993 on, James Irvine worked parallel for Ettore Sottsass and his studio, later also for companies such as Alias, Artemide, Thonet, Cappellini, Mercedes Benz, Muji and WMF.

From 2007 to 2007 he taught as professor at the University for Design in Kalsruhe. In 2007 he was named Honourable Doctor at the Kingston University.