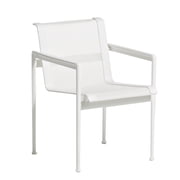 After his studies at the Iowa State University and the Illinois Institute of Technology in Chicago, Richard Schultz joined the Knoll Associates in 1951, in order to work together with Harry Bertoia. Besides his work for Knoll, he designed an office for Stow / Davis. Later on he taught Basic Design at the Philadelphia College of Art. His sculpture attracted a lot of attention in the New Yorker Museum of Modern Art, even getting an own exposition room.

Among others, the Bertoia swivel chairs belong to some of his most famous projects, having been a deciding part of the production process of them. The Petal Collection, which accompanied the Diamond Chair, was also his. According to a petition of Florence Knoll, he designed a collection of furniture that achieved in resisting nature. The result was the “Leisure Collection” (1966 Collection” today), which became an instant classic.

Richard Schultz started his own furniture production beginning with an impressive series of outdoor furniture including the Topiary, the Swell and the Mateo, together with his son Peter. 20 years later, in, he came back to Knoll one more time. Richard Schultz and Knoll offer unmistakably modern pieces of furniture together.