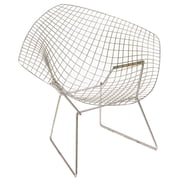 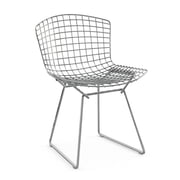 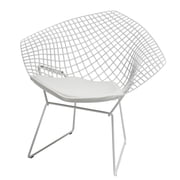 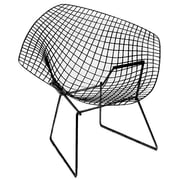 The Diamond chair which has been designed by the Italian sculptor, University professor and furniture designer Harry Bertoia in 1952 for Knoll, was a real genius joke.

Harry Bertoia (1915 – 1978) was inventor of forms and enriched furniture design by the introduction of a new material: He made industrial steel wire rod a design icon. After his apprenticeship at the Detroit Technical High School, the Detroit School of Arts and Crafts and the Cranbrook Academy of Arts in Bloomfield Hills, Michigan, Bertoia taught Metal-Arts in Cranbrook.

He developed the signature chairs our of formed veneer wood together with Charles Eames. Eero Saarinen ordered him to design a sculptured metal shade for the General Motors Technical Center in Detroit. Among his awards there is the Arts Crafts Medal of the American Institute of Architects as well as the golden medal of the AIA.