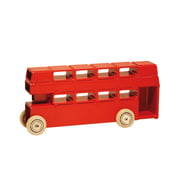 Magis Archetoys is a collection of model cars, which also delights design enthusiasts: The archetypical shape – which is the reason for the name of the series – represents the icons of technique.

The idea of the Archetoys collection by the designer Floris Hovers was inspired by the thought of balancing working and playing. The designer searched for recognizable shapes and colours that would transform the motorized vehicles into unique pieces, recognizable even if their design was reduced to the absolute minimum.

The result was the Magis Archetoys collection, including vehicles in iconic designs, which are immediately recognizable despite of their reduced design: the famous London Busses, New York Taxis and other legends of motorized forwarding.

During the development process was influenced by many factors that are only visible while looking a bit closer: emotions, recognition value, nostalgia and sentimental feelings… all of it is represented by the Archetoys from Magis, which are therefore much more than simple toys for children.