connox.de celebrates the 10th anniversary of the shop

One of the leading online shops for design furniture and home accessories – connox.de - is online since 10 years in August of this year. The founders Thilo Haas and Kristian Lenz launched connox.de on the 1st of August of 2005, with ten products in their assortment. The assortment of the home design shop includes more than 12,000 items of more than 400 design brands today. About 300,000 people of 82 countries all over the world belong to the customers of the company.

The shop anniversary isn’t the only reason for a party, but the development of the company as well – a story of success. The revenue grew steadily recording double digit sales growth from the beginning. This year, the company is working to reach the 10 million euros revenue benchmark – and there is every prospect of success. Currently Thilo Haas and Kristian Lenz are employing 44 people and more recruitment is planned. The international business was forced with the launch of the page connox.com in 2010. One third of the purchasers comes from abroad meanwhile.

“We started on 180 square meters in an ancient post office”, explained Thilo Haas, “We were there for two years. The stock was crowded, so that the packed parcels had to wait for the postman on the sidewalk.” Two moves and eight years later the stock has a size of 2,400 square meters and it runs against its limits once again. 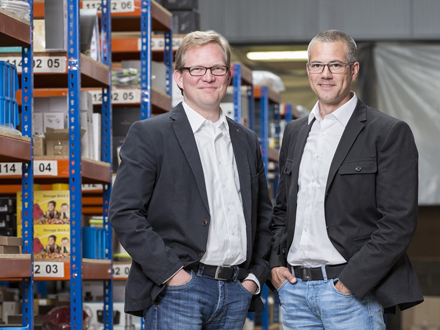 The idea of founding an online shop for home design came at the 10-years high school reunion of both founders. Kristian Lenz (r.) worked in market segments and Thilo Haas (l.) owned technical expertise – a successful symbiosis as we know today. connox.de was one of the first online shops for design furniture. High class products, fast delivery and first class, personal customer service made the name grew in the branch along the years.

Being successful with the own shop software

The secret of the success includes the shop software “ECSuite”, which has been developed by the company and which has been steadily adapted to the demands of the market. “It was therewith possible for us to optimize the shop consequently for search engines and to win fast visibility”, explained Kristian Lenz, “other shop systems hadn’t had that comfort back then. ”Other shops started to demand the “ECSuite”, which therefore became a second pillar. The Connox GmbH decided to let the IT department exist alone to be outsourced in 2014, founding the Quillo GmbH as a 100-percent subsidiary.

The shop anniversary is a year of changes for Connox at the same time. The growing number of employees and the growing assortment need their tribute. The company is going to expand the company’s basement in the Eckener Straße in Hanover. The stock is enlarged and some new office floors are emerging. Furthermore the company is going to launch more international shops in this year, accompanying connox.com.

The customers can expect more offers in the anniversary year: Each week and on each one of the 31 anniversary days there are going to be new offers and shopping-highlights.

About the Connox home design shop (www.connox.com)
Connox belongs to the market leading online shops of home design. The shop offers more than 12,000 awarded products of the premium segment in the online shop connox.com including design classics and innovative items as well. The company based in Hanover runs the shop with the own “ECSuite”, which has especially been developed by the subsidiary Quillo GmbH for online shops.