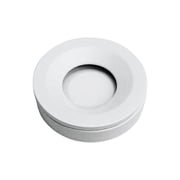 Angelo Mangiarotti was born in 1921 in Milan and graduated there in 1948 at the Polytechnic University as architect. In 1953/54 he attended at the competition for the designing of Loop as guest professor of the Design Institute of the Illionois Institute of Technology in Chicago. During this period he met Frank Lloyd Wright, Walter Gropius and Mies van der Rohe in the USA.

Back in Europe he founded his own office in Milan in 1955. In the following decades he became guest professor in Hawaii, in Lausanne, Adelaide and in Milan. In 1989 he founded the Mangiarotti & Associates Office in Tokyo in cooperation with his partners. His benefits as architect and as product designer were awarded with many international prizes.