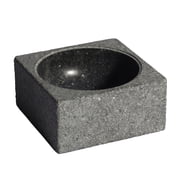 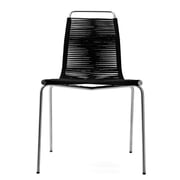 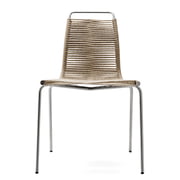 The furniture designer Poul Kjaerholm belongs to the most important representatives of legendary Danish design together with Arne Jacobsen, Poul Henningsen, Verner Panton and Hans Wegner.

Kjaerholm was born in the Oster Vra in Denmark in 1929. He was trained as a carpenter before he started studying furniture design in Copenhagen from 1949-1952.

Kjaerholm is especially interested in different materials and manufacturing techniques. Steel was mainly focussed by him – it was a natural material with the same artistic qualities as other nature materials.

Poul Kjærholm designed the basic concept for a newish furniture series in 1950. With it he challenged the design rules of that time. Kjærholm designed the chairs PK25 in 1951. This one was is diploma work. The frame of the chair consists of cut and chromed flat steel, the seat and the backrest are made out of flag cable which is only surrounding the frame. Poul Kjærholm’s designs for chairs are committed to the classic modern. He controls their strong functionality by softer and more weightless forms as well as the Scandinavian typical usage of natural material such as wood, leather or raw braiding.

Poul Kjærholm designed the chair PK20 in 1952, a two-pieces construction out of formed plywood.

Both models were developed when Poul Kjærholm was occupied during one year in the Fritz Hansen company afterwards. Further furniture pieces followed, such as the PK22. Kjærholm was one of the most important designers of Denmark and Scandinavian design with his works of that time.

Poul Kjærholm worked together with the furniture manufacturer Ejvind Kold Christensen in 1955, until his death in 1980. In 1982 Fritz Hansen took the production and direction of the Kjærholm-collection, running from 1951 until 1967 with his own creations, being logical and full of an aura of exclusiveness until the smallest details.

Fritz Hansen added two new pieces to the Kjærholm collection until 2007. The dining chair PK8 and the dining table PK58 weren’t ever produced until then.