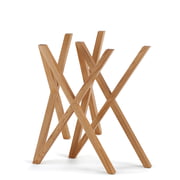 Stephanie Jasny was born in Munich in 1982. Already during her studies at the University of Arts in Berlin, she worked for Schaumburg+Alvisse in Sidney designing and producing sustainable furniture. She graduated in 2008.

Since 2010 Stephanie Jasny works as freelance product developer of furniture and lamps in Berlin, those are produced by famous companies such as Ligne Roset or Hans Hansen. Besides this, Stephanie Jasny also works in brand communication and teaches at the University of Arts in Berlin since 2009.

Besides a nomination for the Innovation Award on the IMM Cologne in 2009 for the lamp Cordula and 2012 for the Frame Chair, Stephanie Jasny already won the German Design Award 2012 on the category “Newcomer”.