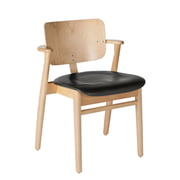 Ilmari Tapiovaara was one of the greatest interior architects and designers of his generation. With the spirit of a researcher and the soul of a craftsman, Tapiovaara was always searching for solutions, to improve everyday-objects. Tapiovaara created numerous iconic products along his career, shich are still loved by the public. The heritage of this master of Finnish design is available inside of the Tapiovaara Family Collection by Artek today.

Ilmari Tapiovaara always wanted to create products that are based on the same ideological premises as a great admirer of Alvar Aalto’s works. Not for nothing his products suit the Artek assortment that perfect – Artek is the Finnish company that has once been founded by Alvar Aalto.

Tapiovaara embodies the principle of social equality of functionalism with his works and he felt that architecture was his design-encourager. Beside numerous chairs and other pieces of furniture, especially for the public room, Tapiovaara developed several interiors for benches, offices, hotels and showrooms from the 1940es on.