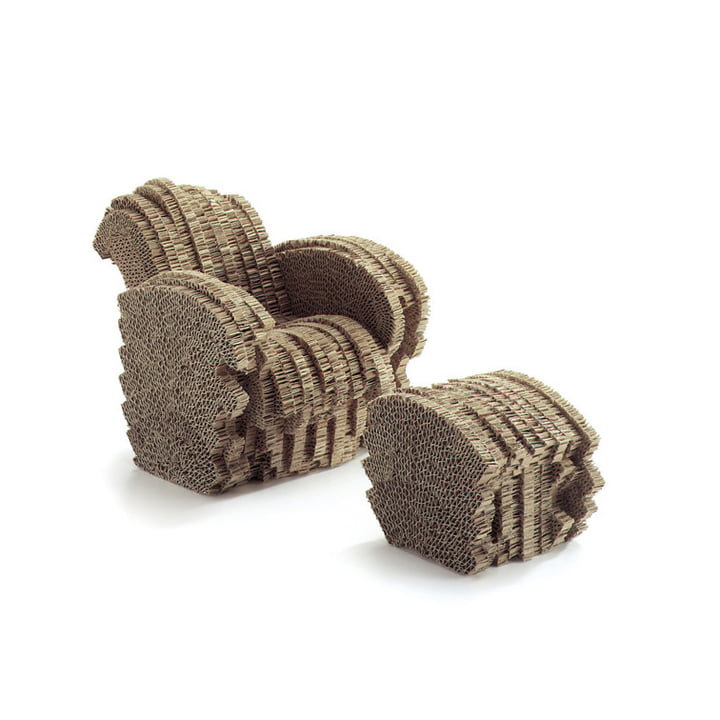 Cardboard furniture as an inexpensive and light alternative to traditional furniture already appears as early as the 1960s. Most designs aimed at lending the cardboard the necessary stability through insert and folding techniques. Gehry chose a different method, which gave birth to sturdy cardboard furniture like cardboard sculptures: "One day I look in my office at a pile of corrugated cardboard, the material I normally used to make architecture models, and I began to experiment with it, to stick it together and to cut it into shape with a hand saw and a penknife".

Following his "Easy Edges" from 1972—a series of extraordinarily sturdy cardboard furniture with a smooth surface—Gehry once again devoted his attention to the use of corrugated cardboard as a material for making furniture from the end of the 1970s onwards . "Experimental Edges" was the name given to unusually expansive armchairs and easy chairs with a rough, ragged- looking surface. Strips of a thick cardboard material, which is usually used for filling door leaves, were sawn or cut along the shaft and processed into massive volumes of various shapes. Using this method, single items or small series of furniture were created, which were both furniture sculptures and surprisingly comfortable chairs and sofas.

The original of the Little Beaver was designed by Frank Gehry in 1987 and is produced as 1:1 model by the Vitra AG, Basel/Switzerland, since 1981-1999.

The here offered miniature by Vitra (scale 1:6) consists of wave-cardboard.