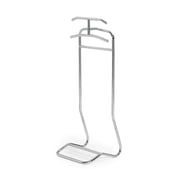 After the studies at the United Estate College for Applied Arts in Berlin and at the Polytechnic in London, Eckard Muthesius (1904-1989) initially worked in the atelier office of James & Yerbury and later for Sir Raymond Unwin. Afterwards he became a master’s pupil in the Atelier of his father, Hermann Muthesius, the founder of the German Werkbund.

He met Prince Yeshwant Rao Holkar Bahadur in Oxford in 1929, the later maharaja of Indore. This one ordered him to build and furnish his palace “Manik Bagh”, in English “Ruby Garden”. Along four years emerged a jewel of Art Décor. Design of the palace and design of many furniture pieces and lamps, by Muthesius himself many of them; moreover he integrated furniture of Eileen Gray, Le Corbusier and many more.

From 1936 to 1939 Muthesius became the manager of city building and the redeveloping authority and advising architect of the Estate Indore. When war began he had to leave India and came back to Berlin, where he worked as freelance architect. Today the “Manik Bagh” palace serves as finances ministerial for the Federal Estate Maghya Pradesh. The interior was auctioned in 1980 in the Sporting Hiver Monte Carlo by Sotheby Parke Barnet to highest amounts – a tribute to Eckart Muthesius.