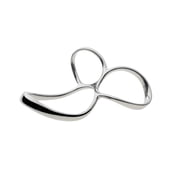 Paolo Gerosa graduated at the Politecnico di Milano in the year 2005. Already during his studies, he begun working as an interior designer and implemented numerous public and private works.

From 2006 to 2007 Gerosa worked in the research center of Baleri Italia (Baleri Italia meanwhile), and participated at the development of new products for the Italian company.

Gerosa soon focused on product design and there also on expression possibilities of industrial products. Beside his studies about the furnishing elements, shortly afterwards furniture pieces in limited editions began to appear.

Paolo Gerosa works together with the Studio LPWK since 2008, designing products for Alessi and other manufacturers. One example for this cooperation is the spaghetti measurer Voile for Alessi.