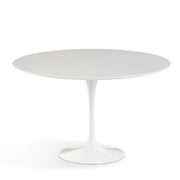 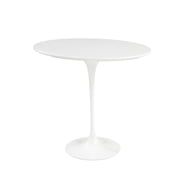 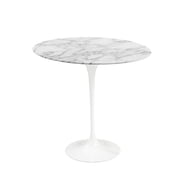 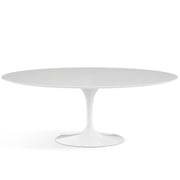 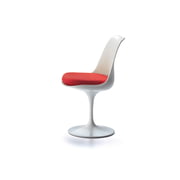 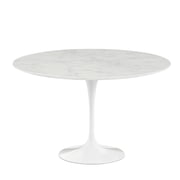 Eero Saarinen (1910 – 1961), son of the architect and director of the Cranbrook Academy of Art, Eliel Saarinen and his wife Loja, which worked as textiles artist, studied sculpture in Paris and architecture at the Yale University before he worked together with Bel Geddes as a furniture designer and for his father as an architect.

Saarinen also worked together with his friend Charles Eames, a student of the Cranbrook Academy of Art, and he finally became independent in 1950 in Bloomfield Hills.

The strong technical possibilities of new materials found a way into the expressivity of Saarinen’s work: steel and concrete in architecture, plywood and plastic in his furniture design.
Together with Charles Eames, Eero Saarinen won at the “Organic Design” competition, which has been organized by the Museum of Modern Art (MoMA) by its director Eliot Noyes. Their design out of plywood and sponge rubber was the first three-dimensional oval chair, which however lacked from production techniques, which was the reason why it was never produced as a serial product. Only a few years later the plastic technique was improved in order to start to produce the chair – this happened thanks to Vitra in 2006.