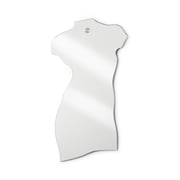 Born in 1905 as son of the popular Turin constructor Eugenio Mollino, Carlo Mollino studied at the Instituto Superiore di Architettura in Turin, Art-History and Architecture. After he graduated in 1931 he initially worked for his father. Mollino wrote for magazines and newspapers about the themes art and culture beside his work as architect at that time.

Mollino is considered universally talented and his strength doesn’t only include architecture and furniture design, but also photography, record-car designs, diverse performances at the 24 hours from Le Mans and aerobatics.

Many of his architecture designs however, stayed unimplemented. Not so his designs of interior furnishing: with the processing that was patented by Mollino, plywood could be formed cooled down, creating many innovative objects that are trend setting today for the “Organic Designs”. His furniture designs reach international record prizes, whereby they were produced in a reduced number or as unique pieces at that time: a Carlo Mollino table, designed in 1949 for example, was auctioned off in 2005 by Christie’s for 3.8 Million Dollar.

Carlo Molino passed by in the year 1973.