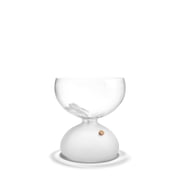 Arik Snee is an US-American designer and artist, who mainly concentrates on glass.

The American gained his experience with glass in small studios, in academic works and in factories. This gave Snee an overview of the fragile material, which is desired all over the world since many centuries.

After studying at the Salisbury University in the US estate Maryland and at the Canberra School of Art in Australia, Snee worked in different studios in new York, where he started to find a connection between “Studio-Glass” and industrial production.

Snee’s works are inspired by nature and discover the ”relation between small fragments and the whole of it”, like the artist and designer calls it himself, by means of searching for ”the macro-cosmos inside of the micro cosmos”. Accordingly, the designs of Eric Snee cannot often be clearly characterized. Mostly they move changing between arts and design.