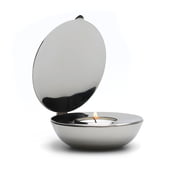 Magnus Löfgren is a Swedish designer who studied at the School of Design and Craft of the University of Gothenburg. He manages his own design studio in Stockholm, Sweden since 1985.

He is closely linked with Design House Stockholm and developed products for the company like, for example, the Shell tea light holder or the Focus Vase, which has already been awarded the Excellent Swedish Design Award in 1995.

The designs of Löfgren are characterized by an exceptional blend of creativity and simplicity. He is a staunch supporter of the Nordic design tradition, which was formed by designers and architects such as Alvar Aalto, Arne Jacobsen and Kaj Frank.