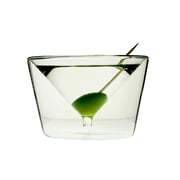 The designs of BY:AMT come from the designer Alissia Melka-Teichroew. Right after her design career in Eindhoven she founded the studio "Alissia MT Design" in 2000, which was renamed BY:AMT in 2005.

Initially she worked for PUMA International and other companies fascinating with her designs. In 2006 BY:AMT became a fast-selling company beause of the original ideas.

The BY:AMT designs are full of playful specialties and have an own charm. They can be thoughtful and also playful. Good examples for the creativity of Alissia Melka-Techroew are her InsideOut-Champagne glasses. Without base, almolst floating, they surprise with magics and functionality.

BY:AMT's ring collection was a part of the re-opening of the famous London Victoria & Albert Museum in 2008.