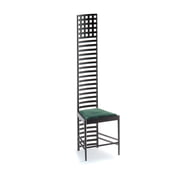 Charles Rennie Mackintosh was born at 70 Parson Street, Glasgow on 7 June 1868 as the fourth out of eleven children and the second son to William McIntosh and Margaret McIntosh. The young Charles attended Reid's Public School and the Allan Glen's Institution.[1][2] In 1890 Mackintosh was the second winner of the Alexander Thomson Travelling Studentship, set up for the "furtherance of the study of ancient classic architecture, with special reference to the principles illustrated in Mr. Thomson’s works."[3] Upon his return, he resumed with the Honeyman and Keppie architectural practice where he commenced his first grand architectural project, the Glasgow Herald Building, in 1899.

Charles Rennie Mackintosh met fellow artist Margaret MacDonald at the Glasgow School of Art. Members of the collaborative group known as “The Four”, the two married in 1900. After several successful building designs, Mackintosh became a partner of Honeyman and Keppie in 1907 his last major architectural commission. When economic hardships were causing many architectural practices to close, he resigned from Honeyman and Keppie in 1913 and attempted to open his own practice. Unable to sustain his office, Mackintosh and his wife took an extended holiday in Suffolk where he created many floral watercolours. Upon return a year later, the Mackintoshes moved to London where Charles continued to paint and create textile designs. In 1916, Mackintosh received a commission to redesign the home of W.J. Bassett-Lowke. This undertaking would be his last architectural and interior design project.

Due to financial hardship, the Mackintoshes moved in 1923 to Port-Vendres,[4] a Mediterranean coastal town in southern France with a warm climate that was a comparably cheaper location in which to live.

During this peaceful phase of his life, Charles Rennie Mackintosh created a large portfolio of architecture and landscape watercolour paintings. The couple remained in France for two years, before being forced to return to London in 1927 due to illness.