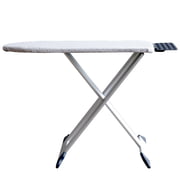 Design Group Italia is a design studio which has its main office in Milan. It was founded in 1968 by Marco Del Corno and nowadays, it has 24 full time employees of different areas and with different educational backgrounds.

Under the supervision of Edgardo Angelini, Ross de Salvo, Sigurdur Thorsteinsson and Gabriele Zecca, several processes and tasks like industrial design, engineering design, marketing, graphic design and cmf design as well as model building and the creations of computer graphics are coordinated.