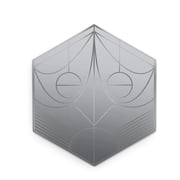 Federico Floriani was born in Treviso (Italy) in 1988. He studied industrial design at the University of Art and Design in Venice. After his bachelor's degree he did an internship at the London studio IMlab, which specialises in interior design and architecture. He then worked as an assistant to the Italian designer Matteo Zorzenoni. He then moved to Eindhoven in the Netherlands, where he worked with Studio Formafantasma on various projects for almost a year.

"My work is mainly influenced by what fascinates me. I love to search for unusual objects, ideas and worlds, to look back on symbols, beliefs and myths. I ideally imagine my design as a Roman villa, full of statues, paintings and hidden meanings. As if my ideas, secrets and memories of the past could have a deeper meaning that will never be discovered." Federico Floriani