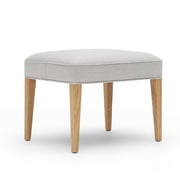 The Dane Frits Henningsen (1889-1965) was known as an uncompromising designer who always respected traditional craftsmanship and was inspired by numerous styles throughout his lifetime. As a trained carpenter, he opened his own furniture business and benefited from the contact with customers who helped him to improve his designs on a daily basis.
Like many of his creative elite contemporaries, Henningsen travelled through Europe for a while to gather experience and inspiration for new designs.
The different expressions of other styles later flowed into his work and helped him to create his own individual design language. He drew inspiration from styles such as French Empire, Rococo, and British 17th-century furniture, which can be seen in his designs, sometimes in a more subtle way. Frits Henningsen constantly developed his skills and created furniture that reflected his great attention to detail.