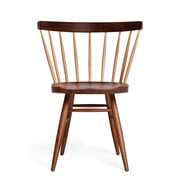 George Katsutoshi Nakashima was born in 1905 in Washington and passed by in 1990. The architect, furniture designer and craftsman is considered one of the fathers of American handcrafted arts.

In the beginning of his career, Nakashima studied architecture at the renowned Massachusetts Institute of Technology. After his graduation in 1931, the Japanese-born American started a big world trip which would inspire him for his later work. George Nakashima was a whole year in France, but also in North Africa and Japan.

Nakashima went back to the USA in 1940 and started to teach wood processing and to produce his own furniture pieces. As well as other Japanese people, Nakashima was sent to an US-internment camp as prisoner during the Second World War despite of its American nationality. During the time in the camp, Nakashima learned how to treat traditional Japanese tools carefully from Gentaro Hikogawa.

George Nakashima was freed by the demand of the respected architect Antonin Raymond in 1943 and started to work for famous manufacturers such as Knoll from then on. The style of Nakashima became legendary, many of his works are classics today.

Something typical for Nakashima was the connection of traditional American and Japanese stales with modern ones. Many of his designs have different influences, but some constants are there all the time: George Nakashima valued to work with the best wood. Colour and material contrasts are typical for the work with wood by Nakashima.

George Nakashima was honoured with the Medal of the holy treasure, endowed by the Japanese emperor and the government. This “Medal of honour of Japan” proves George Nakashima’s value for the international market of arts and crafts.