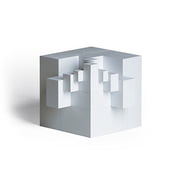 Jo Niemeyer was born in Alf in 1946, he went through an apprenticeship as graphic designer before he studied design/architecture at the Institute for Industrial Design in Helsinki. He taught at the Finnish Academy of Arts in the capital Helsinki from 1983 to 1986.

Student travels led him to India, Nepal and China among others. He began his freelance artist work as graphic designer, painter, sculptor, constructor in 1970 and works at country-art-projects since 1988. Since 1970 he leads his own ateliers in Germany and Finland.

Jo Niemeyer’s works were awarded inland and abroad and are part of numerous private and public collections such as the foundation for concrete art/Reutlingen, the Museum for concrete art/Ingolstadt, the new collection in the Pinakothek der Moderne/Munich, Stadt Jyväskylä/Finnland, MoMa/New York, Finnish National Gallery Helsinki, Mondriaanhhuis/Amersfoort/NL., Nickle Arts Museum/University of Calgary.