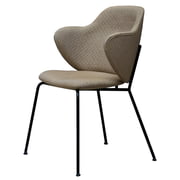 Designer with Penchant for the Oblique and Sustainability

Magnus Sangild is a Danish designer with a penchant for the oblique and sustainability. His designs last a lifetime, and always have a story to tell.

Originally the designer wanted to become a carpenter with Studio in Copenhagen. He did an apprenticeship with the renowned Danish cabinet maker Gert Kjeldtoft, then studied at Aarhus Design. After graduating in 2009, he was already known as a designer in Denmark thanks to his “New R/B Chair” which is now included in the permanent exhibition of Denmark's leading museum of furniture and design, the Trapholt in Jutand. He went on to become chief designer of the Danish company by Lassen.

Magnus Sangild deliberately works in the cross field between art and design – a field referred to as ‘cross-over’. Boundaries are crossed and new possibilities are discovered, thus increasing the diversity within the furniture market.