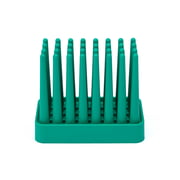 The Japanese architect and designer Naoki Terada was born in 1967 in Osaka. After his bachelor of Engineering at the Meiji University in Tokyo (1989) and another closure at the Architectural Association School of Architecture in London (1994) Naoki Terada worked as independant designer.

In 1999 he started with his cooperation work with the K/O Design Studio in Tokyo and teached at the same time at the Meiji University.

In 2003 Naoki Terada founded his own architecture- and design office "Teradadesign" and teaches since 2006 at the Nihon University, Tokyo.

Naoki Terada understands himself in architecture, produkt- and interior design. The seating object Hokka Ido by Koziol is one of the most famous products.