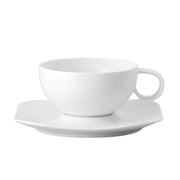 Robin Platt has established himself as one of the most successful British designers of the past ten years. Working alongside Cairn Young together as Platt & Young, he has worked in Italy for companies such as Driade, Sawaya & Moroni, Arper and Magis. In Germany for Rosenthal, WMF, Auerhahn and Koziol. In France for Baccarat.

Since 2002 he began a solo career alongside the partnership, notably with the Free Spirit table service for Rosenthal and working on cutlery designs with WMF. Robin is currently working on a bathroom concept for Artquitect, and a lighting project for Metalarte in Barcelona. 2006 has seen another Platt & Young collaboration with the exciting new 'A La Carte' table service design for Rosenthal.