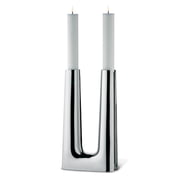 In 1952 he created a line of abstract sculptures out of plaster, stoneware and bronze.

He was a member of the free exposition and the Academy of Arts since 1978. Søren Georg Jensen’s sculptures emphasize an abstract but geometric form speaking and are still viewable in some of Copenhagen’s streets today.

Søren Georg Jensen was strongly inspired by artistic movements of functionalism. Famous, Danish architects and sculptors such as Arne Jacobsen or Henning Koppel count to his famous contemporaries.

Befor Søren Georg Jensen passed by in 1982, he was Art Director at Georg Jensen. He fulfilled the philosophy, the artistic spirit and the visions of his father and opened gates for a new generation of artists.