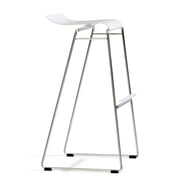 Stefan Broselius was born in 1974 in Malmö. After finishing a three year apprentice as a cabinet maker, he started studying furniture design for two years at Stenebyskolan and than, Broselius worked as a restorer. In 2002, he received his Masters Degree of Fine Art at the School of Arts, Craft and Design in Stockholm; shortly after that, he joined the Design-ensemble of the Swedish manufacturer Blå Station. There, Stefan Broselius is seen as a thinker and listener who firstly takes advantages and disadvantages into consideration and then chooses his words as carefully as the expression of his design.

Together with Fredrik Mattson, Broselius created for Blå Station very successful design furniture, like the lounge arm chair Snooze, the table series Level and the stackable chair Sting which was awarded with the Red Dot Design Award and in addition it received five other design awards.

However, Stefan Broselius convinces due to his talent not also as a team member. When creating the extraordinary arm chair Peekaboo for Blå Station, it became obvious that Broselius also has his own design style. His creations can be interpreted as the attempt to harmonize the incompatible contradiction of tradition and modernity. Broselius himself says about his work: “I want to find new forms and new functions for traditional furniture and new furniture for traditional people in a new age."