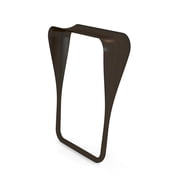 Harmonious Design with a French-Japanese Style

The A + A Cooren Design Studio is made up of the designer couple Aki and Arnaud, creating harmonious design objects in a Japanese-French style. Aki, daughter of Japanese jewellery designers, was born in Paris in 1974 and grew up in Tokyo. After a year in the United States she moved to Paris at 18 and studied interior design and product design at the École Camondo, where she met Arnaud. The Frenchman was born in 1973 in the North of France and studied art in Belgium, before he moved to Paris.

Since the founding of their studio in 1999, they have worked for renowned brands such as Shiseido, Artemide, L'Oréal, and many more. In addition, they create unique pieces for private clients and collaborate with architects to furnish houses.

With their designs, they want to bring nature into the home in subtle way and try to derive their designs from forms of nature. Ari and Arnaud, the founders of the A + A Coors Design Studios, focus on design and development. The interaction with their surroundings, from the idea to the customer, plays an important role in the development process. Harmonious and clear objects are created, taking into account the environment, the surroundings and the user.