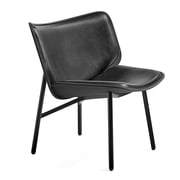 The Design Studio Doshi Levien based in London, was founded in the year 2000 by Nipa Doshi and Jonathan Levien. Doshi Levien's work is a hybrid and means the fusion of cultures, technologies, histories, industrial design and fine craftsmanship.

Nipa Doshis visual orientation is combiden with Jonathan Leviens precision and reliability as industrial designer. Doshi Levien's work therefore comprehends all disciplines and industrial braces. They coin their own rules that consist of gaining as much knowledge as possible from one new experience or idea.