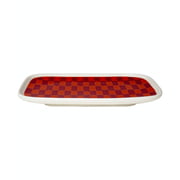 Fujiwo Ishimoto is a Japanese designer, especially known for textile and ceramics design. This made him famous in Scandinavia.

The 1941 born Ishimoto started to work for Marimekko in 1974. This meant he was the second Japanese working for the Finnish company after Katsuji Wakisaka. The designer is especially interested in the relation between simplicity and excitement, which is represented in nearly all his creations.

The result is often abstract, but always well-proportioned and harmonic. Most of the geometrical patterns by Fujiwo Ishimoto became famous in the 1970s and are still as well popular being honoured with numerous design awards. Beside his work for Marimekko, the Japanese also works with ceramics, which he creates for Arabia. Ishimoto is a good example for Scandinavian design, which can be very international.