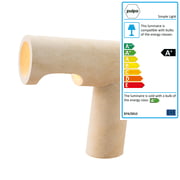 Harry Thaler is a trained goldsmith and craftsman and studied product design at the British Royal College of Art. He graduated in the year 2010; and he was honoured with the COnran Award in the same year. He received the Interior Innovation Award only a year later in 2011 for his Pressed Chair.

Harry Thaler lives and works in London since 2008, managing his own design studio. The designer works for different private and public projects in addition to numerous exhibitions and design fairs.

His artisanal knowledge and skills are inevitably displayed in his designs: Thaler’s sophisticated products are characterized by functionality and simultaneous elegance, but always with an impression of classic timelessness.