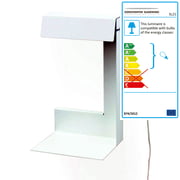 Julian Appelius was born in Munich in 1973 and grew up in France and Germany. After the high school he made an apprenticeship as carpenter and studied sculpture at the Academy of Arts in Munich, afterwards he studied Industrial Design at the University of Arts in Berlin and graduated in 2003 founding his office there.

The focus of his work is conceptual production. The game with learned see- and acting-habits, new interpretation of contexts and the fully use of materials and technical possibilities form the basis of formally reduced design. Furthermore he works as graphic-, interior-, fairs- and expositions-designer.