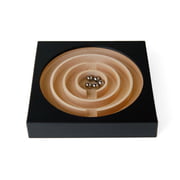 Kurt Naef dedicated more than 60 years of his life to wood materials, initially during his apprenticeship as carpenter and later on as designer of wooden toys, making a name all around the world with them. But the path to success was all but straight; it was guided by a few coincidences, meetings and changes.

After his graduation as interior designer in 1956 at the School of applied arts in Basel and Amsterdam, Naef founded his own shop for interior design and applied arts in Basel. The numerous demands from customers after sophisticated toys, made him produce toys himself, leading to the opening of a modern production atelier in Zeiningen in 1967 for the manufacturing of wooden toys – designed by Kurt Naef himself and by many other namely designers. The name Naef is internationally famous for perfect wooden toys and stands exemplary for the quality of “Swiss made”.

“The toys maker” passed by in Zofingen in 2006, after his company returned to his family after being sold for a short while.