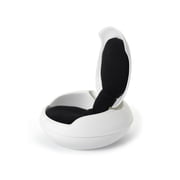 Peter Ghyczy belongs to the type of designers that influenced German design noticeably.

He was born in Budapest in 1940 and escaped to Bonn after the suppression of the Hungarian folks uprising, 1956.After his high school degree, he studied architecture focusing on construction technique at the technical University in Aachen. He was assistant of the namely architect Prof. Rudolf Steinbach and worked in the synthetics institute of the faculty. With a work about now school architecture he graduated in architecture at the RWTH Aachen.

He took a managing position as freelance at Elastogran in Lemförde, where he was responsible for polyurethane products. Peter Ghyczy developed numerous innovative designs which make him one of the most productive designers of those years.

In the year 1970, a time when synthetics architecture was innovative, a building was constructed which completely consisted of polyurethane: the Design Center. It was totally built after Ghyczys design.

The Design Center was one of the leading design studios whose approach of technical development and product design was unique and the only one in synthetic branches until then. Besides newish, modular construction pieces such as emergency shelters and façade elements, especially all kinds of furniture pieces were designed there: chairs, shell-chairs, living landscapes, tables, shelves and practical door fronts for offices and kitchens. Namely companies got licenses, among others there were Drabert, The United Workshops, Vitra (still Fehlbaum GmbH then) and Beylarian in the USA. However, only one model became famous: the Garden Egg from 1968, the first foldable armchair.

The Design Center was closed in 1972 and later on it was also demolished. The company was sold to BASF and the polyurethane technique was secretly sold to the German Democratic Republic, who also received the Garden Egg.

The GDR let the Ghyczy design be produced by the VEB Synthesis Workshop Schwarzenheide in Senftenberg. The exact number of pieces is unknown. It became a desired collector’s piece in the arts scene of the late nineties as “Senftengerg Egg” and it was thereby often and by error named the GDR Design. Peter Ghyczy re-edited his design later however.

Ghyczy founded the Ghyczy + Co Design company in Viersen in 1972 and presented his first own furniture collection. He patented a lot of his designs, especially the clamping technique as connection of glass and metal, out of which he designed a newish base-free table which was often copied and which was followed by a whole product family. Finally the clamping console R 03 emerged, a base-free shelf and anonymous classic, which is in every hardware store today – as plagiarism. Also numerous lamps such as his MegaWatt and the table lamp MW 17 were created by Ghyczy, a bent balanced tube and therewith another frame-free construction – a principle that design historically reminds of a cantilever. Peter Ghyczy used cast pieces out of metal, especially aluminium and brass for his designs. The casting procedure came out of his experience with cast techniques with synthetics.