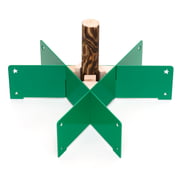 Peter Keilbach, founder of the Keilbach Design company, walked a long way to reach the level he has today.

He began his journey to become a “designer” with a secondary modern school degree at the secondary school Krautheim. Afterwards he was trained in an apprenticeship to become a fine mechanic and collected his first working experiences. Further studies to become an officially recognized machine technician followed, also the advanced technical college certificate, diverse practices and then the studies to become a product designer.

After Peter Keilbach collected his first experiences as industrial designer, he founded his own office for product design named “Keilbachdesign” and soon founded the Keilbach brand.

Meanwhile he additionally works as teacher for typographic and writing graphics at the school for design in Heilbronn.

Keilbach’s slogan is “good paintings with as few paint as possible”. This is transferrable to all his works and describes his minimalist and simultaneously demanding design-approach. Following this, it is complicated, “with simple geometrical basic elements and few colours, to create interesting paintings, as if one uses the whole repertoire of forms and colour variations.”

“The challenge is to confuse the eyes of the contemplator with a few, reaching a lot or to send him on an adventurous trip.”

With this concept Peter Keilbach was honoured with diverse awards and his products are displayed in numerous design collections all around the world. Furthermore he possesses some national and international patents.